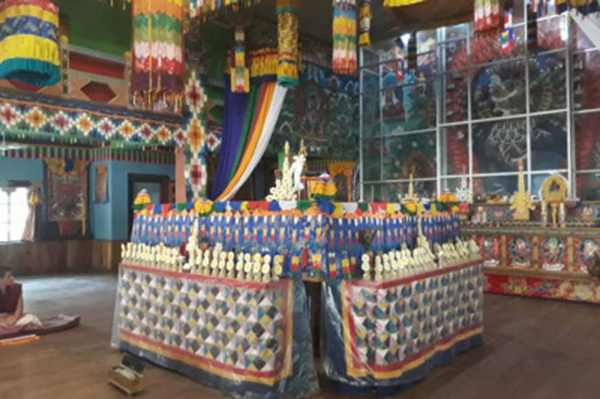 On 19th May and 20th May, 2018 in the auspicious month of saga dawa, Namgay Tongchoed was conducted twice presided by Kurizam Ngakdra principal Khenpo and Lopen with more than 45 monks .

With Kurizam Ngagda Dorji Choegar built, it has become possible for H.E. Gyeltshen Trulku to train the novices in one place and then send them to different drubdeys. Earlier, the novices were trained depending upon the convenience of place and time.

Today, there are 30 novices and teachers at Kurizam Ngagda Dorji Choegar. The teachers and students are provided with subsistence allowance/stipends and other necessary physical facilities, including telecommunication facilities. The performance of the Choegar has been very good so far.
Kurizam Ngagda Dorji Choegar also has a good number of books on Buddhism from across the world. Therefore, it also serves as a library. It is hoped that the library will be further developed for the cause of spreading Dharma.