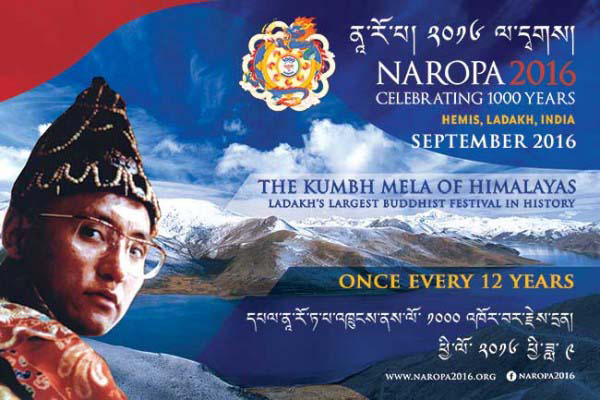 Ladakh’s largest Buddhist festival, Naropa events, will be held in Hemis Monastery from 16 to 22 September. Known as the Kumbh Mela of the Himalayas, the festival, held once every 12 years in the monkey year, is expected to draw half a million devotees from across the Himalaya.

The festival celebrates the life of the towering Buddhist saint Naropa. Naropa, an Indian scholar-saint, is known for his profound contributions to Buddhist philosophy. His legacy had traversed the Himalayas and shaped the identity and culture of many peoples and continues to have a lasting impact on the modern world. Upon his moment of nirvana, Naropa is believed to have been offered the Six Bone ornaments by Dakinis from the sky. These ornaments are revered relics of Buddhism and historic symbols of a great Himalayan odyssey to this day.

The event is considered one of the biggest religious carnivals in Ladakh for it brings forth rare cultural programs which are believed to grant liberation upon sight.
The event also witnesses the assembly of Drukpa masters from across the Himalayas. The highlight of the event is the display of the famed, sacred six bone ornaments belonging to Naropa by his Holiness the Gyalwang Drukpa, the head of the Drukpa order. The six bone ornaments are considered some of the holiest treasures of the Himalayas and are the symbolic origin of many of the foundational practices of Himalayan Buddhism.

The Drukpa lineage or Drukpa Kagyu is considered an integral part of the Himalayas and central Asian legacy and culture. Dating back to Naropa, the Drukpa lineage is woven throughout the history of Buddhism. The Drukpa lineage follows the Mahayana Buddhist tradition in philosophy, namely the philosophy of “enlightenment for the benefit of others.’’

Drukpa Kagyu being the state religion of Bhutan, many Bhutanese pilgrims and Drukpa masters from the country are expected to attend the event.
Source: Bhutan Times, 28 August 2016 (p.9)