About
The Life Story of Naropa 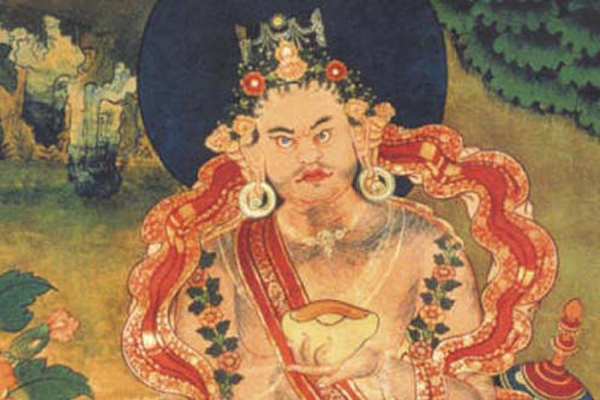 According to 'The Wand that Opens the Eyes and Dispels the Darkness of Mind' (the abridged collection of biographies of the successive Gyalwang Drukpas), Naropa was born around AD 956 and passed away around AD 1050. However, other sources record him as living between AD1016 and 1100.

Naropa was born in the small kingdom of Bengal. His father was a royal chieftain of an area named Shantivarman and his mother was called Srimati. His yearning for spiritual development was so strong that, when he was eight years old, he journeyed to Kashmir (one of the main seats for Buddhist studies in historical times) in order to study with the master Gaganakirti. It was from Gaganakirti that he received his lay ordination.

Naropa remained in Kashmir for three years, learning Buddhist articles and philosophies from many great masters. By the end of his stay there, he was an erudite scholar and, upon returning home, already had a number of students following him as their master.

Three years after his return from Kashmir, Naropa was forced by his parents to marry a lovely Brahmin girl, Vimaladipi (also known by her caste name, Niguma). Although they were happily married, Naropa's ardent wish to live a full spiritual life in a monastic environment became increasingly strong and Niguma also began to take spiritual practice seriously. After eight years of marriage, the couple decided to divorce and take ordination orders. Later, Niguma became one of Naropa's most advanced disciples and a devoted spiritual companion; she served Naropa when he lived in Pullahari, Kashmir.

After the divorce, Naropa went to the hermitage of Anandarama, where he was ordained as a novice by Abbot Buddhasarana and the guru Jnanaprabha, with whom he stayed for three years, mastering various Mahayana and Tantrayana philosophies. He then stayed in Pullahari for six years and wrote several commentaries on Guhyasamajatantra, Abhidharma-uttaratantra, Samvara-udbhava and Hevajratantra and composed many other works based on the Buddha's articles. Pullahari later became an important pilgrimage site in the Tibetan Buddhist tradition, because it was one of the places where Marpa received instructions from Naropa.

After his stay in Pullahari, Naropa went to Nalanda University, where his wisdom, oratory skills and spiritual understanding earned him the chancellorship of the university. He also became the 'Northern Gatekeeper'. Throughout his eight years' residence at Nalanda he was constantly faced with difficult debates with the Tirthikas, but was regularly victorious in these. At this time, he was known as Mahapandita Ahbaya Kirti (Tib. Jigme Dragpa).

Naropa's years at Nalanda were mostly engaged in intellectual activities until an old and ugly woman – who was, in fact a manifestation of Vajra Yogini – appeared before him and made him realize that he was not managing to break through his spiritual misconceptions and misunderstandings. She pointed out that he should look for his destined guru Tilopa if he wished to attain Ultimate Liberation. As a result of this meeting Naropa left Nalanda, searching earnestly for Tilopa – a great master who could lead him to realize the ultimate nature of his own mind.

Traveling eastward, Naropa finally met his destined root guru, who instantly put him through difficult tests. Naropa experienced twelve major and twelve lesser hardships in order to purify his karma and emotion-induced obscurations. Through receiving great blessings from Tilopa and accomplishing his own purification, Naropa realized the clarity and harmony of mind – truly experiencing the state of Vajradhara. After attaining this magnificent realization, Naropa taught in many places and had numerous disciples, especially in Kashmir and Zanskar where he established many monasteries.

According to His Holiness the Twelfth Gyalwang Drukpa, Sani is also the place where Naropa flew up into the sky upon attaining enlightenment whilst wearing the renowned Six Bone Ornaments. Naropa meditated in a small hut facing the Kanishka stupa and taught the people of Sani for a number of years. When it was time for Naropa to leave, the local people sincerely begged him to stay. Naropa took out a golden Vajradhara statue from the hair knot on his crown and said, "There is no difference between Vajradhara and me. Venerate this statue of Vajradhara just as you are venerating me and you will get the same blessing." Naropa left after handing over the golden statue to the local people; today, this is kept in the heart of a very special Naropa statue (see plate number 3 on the left column), which is unveiled once a year in late July on the eve of the Naro-Nasjal festival. People from all over the Zanskar valley participate in this festival, at which time monks from the Drukpa Bardan Monastery perform mask dances as well as ritual offerings.

Naropa spent twelve years serving his guru Tilopa until the latter's death. Naropa himself was said to live until AD1050 or 1100 (according to the different sources) and then resurrected into the light, leaving no physical remains. Tilopa and Naropa are both recognized as two of the eighty-four great mahasiddhas in the history of Buddhism.

Amongst Naropa's accomplished disciples was Marpa, the translator, who succeeded Naropa in the lineage and brought the articles and transmissions in their entirety to Tibet.