About
The Founder of the Drukpa Lineage 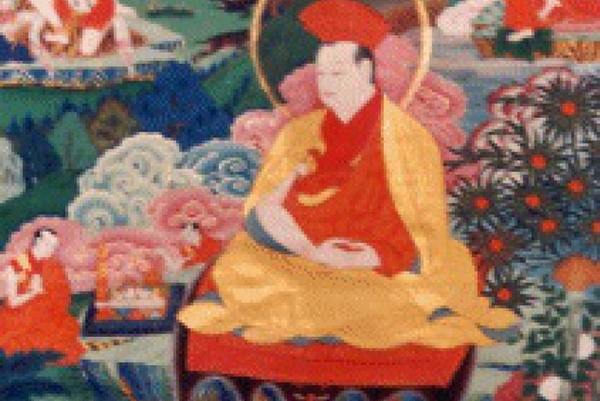 Tsangpa Gyare Yeshe Dorje (1161-1211) was one of the most outstanding disciples of Ling Repa. He was the actual founder of the Drukpa Lineage and the first Gyalwang Drukpa.

Tsangpa Gyare was prophesied in numerous texts and recognized as the indisputable emanation of Naropa. Khenpo Ngawang Choedrak quotes the Buddha's prediction as recorded in the Fundamental Tantra of Manjushri (Toh. 543):

Three thousands years after my nirvana,Sonam Nyingpo will appear, in his future incarnation in the land of snows.

He will be born in the Hwashang (Chinese) race and given the name Gelong Yeshe Dorje.

He will renounce worldly existence and voluntarily embrace the essential meaning.

He will establish sentient beings in liberation,and while abiding in the essence free from the two extremes, he will flourish my doctrine.

Tsangpa Gyare has an interesting family background. He was the youngest of his Chinese father's seven sons. His great great grandfather, Lhaga, settled in Tibet after escorting the Chinese Princess Wencheng of the T'ang Dynasty who married the famous Tibetan King Songtsen Gampo (617-650). Lhaga is known to be one of the two strong Chinese men who were selected to pull the royal chariot that carried the precious statue of Jowo Shakyamuni to Tibet. The Chinese princess demanded that her father Emperor T'ang Tai-Zong give this statue as part of her dowry.

As Tsangpa Gyare was born in the region of upper Nyang in the Tsang province, he is known as Tsangpa. Since he became a cotton-clad yogi and was of Chinese ancestory, he was called Gya Repa. In the early part of his life, he was called 'Gyaton' which literally means 'Chinese teacher'.

At the time of the conception, his mother Khandroma Mangza Darkyi is said to have experienced great bliss. She dreamt that a handsome crystal prince with a cool stream of moonlight in his right hand and a white lotus in his left hand entered her through her right side. Prior to his birth, she clearly heard the sound of Dharma teachings being constantly proclaimed in her womb. He was born in a nomadic tent in the summer of 1161 amidst many miraculous and auspicious omens. However when he was born, his mother saw and was surprised that the infant appeared to be nothing more than a lump of flesh wrapped in a piece of skin. Frightened and embarrassed to see such an object coming out of her body, she cried and abandoned him. Afterwards she told her brother Lha-nyen about the strange object and they went back to see it. From the distance they saw a vulture hovering above the tent. This made them even more worried fearing that the vulture may have eaten the object. Upon their arrival they discovered that the lump had opened itself and a handsome boy had appeared. His body was endowed with the numerous marks of an enlightened one. The vulture, who was in fact an emanation of a dakini, was protecting the lump of flesh with its huge wings until the baby broke the piece of skin with his legs, casting a deep foot print in a rock nearby.

As his parents were poor and unable to look after so many children, they let this young boy be adopted by some Bonpos who cared for him and named him Yungdrung Pal. He learned how to read and write when he was four. He told some of his playmates that the only bad thing he had ever committed in his entire life was that one day he killed one young goat. Since then, he had felt strong renunciation and did not wish to lead a worldly life. Knowing this to be his predisposition, his elder brother Naljorpa Sangpo introduced him to Lopon Kharchungpa, who became his first teacher. When he was eight years old his mother passed away and he then took novice ordination from Lopon Tathangpa and received the name Sherab Dutsi Khorlo. As a novice he studied Abhidharma, logic and also heard extensive teachings on Bodhisattvacharyavatara and Kadampa from Geshe Omthangpa. Subsequently his elder brother Kaldhen took him to meet a Dzogchen Khenpo from whom he received extensive teachings and learned how to recite Kamkani Mantra. When he was fifteen years old, both his elder brother Kaldhen and Lopon Tathangpa died in five days. Tsangpa Gyare became severely ill from an ear infection. After having carried out the necessary funeral arrangements, he gave his first public sermon in Yung.

At the age of 19, he invited the teacher Kharlungpa in Saral, who three years later, formally declared him a 'great scholar'. There is a detailed account of how he painted his face with many colors and danced miraculously, how he gave teachings that even young children rejoiced and praised. The first offering he received from giving teaching was a basin full of rock salt from a devotee in Shang. His father and elder brothers also became his followers.

After hearing that Ling Repa was invited to Ralung, he went there to meet him. He did not take any teachings from Ling Repa during that first meeting but after some conversation he was very impressed by Ling Repa. Later Tsangpa Gyare used to say, "I must have received his blessing at that meeting".

When he was 23 years old, on the way back from his travel to Lhasa and Samye, he met Ling Repa in Trengpo Mereg and received extensive teachings on tummo – psychic fire practices. After only several days of practice, he was able to wear only a single cloth made of cotton. This is regarded as a quick accomplishment. When Tsangpa Gyare became ill from small-pox, Tonpa Dorgyal and others requested the teacher to exclude him from attending classes in fear of catching the disease. The teacher replied, "You all can remain here and discuss the teaching, I shall take Tsangpa Gyare to Naphu and will nurse him myself".

Although Tsangpa Gyare remained sick in Naphu for some time, he diligently practiced the instructions he received from Ling Repa and experienced many profound realizations. He became immovable from his meditation seat and experienced his mind merging into the sky. After reporting his meditative experiences to Ling Repa, he was asked to further his practices. Tsangpa Gyare's meditation improved to the extent that he could now clearly see his teacher as the inseparable nature of all the enlightened ones. Out of genuine devotion, he then offered Ling Repa a horse as a token of his gratitude.

It was in Lhodrak that Tsangpa Gyare revealed a treasure of esoteric meditative instructions called 'The Six Equal Tastes' which Rechungpa, the moon-like disciple of Milarepa, had brought back from india and hidden, to be rediscovered at the opportune time by the appropriate person, for the benefit of future generations. Later, after meditating under a tree without changing his posture for three months, seven Buddhas appeared before him and revealed the most esoteric pith instructions, which he titled 'Seven Auspicious Teachings'.

Tsangpa Gyare founded the Shedrub Chokhor Ling monastery at Ralung near Tsang in 1193 under the instructions of Ling Repa , who also told him to teach widely, and his yidam. Later in 1206, while he was on his way to U to establish a large monastic center, as he and his followers reached Namgyi-phu, nine dragons (later said to be the manifestations of nine Indian Mahasiddhas) reared up from the earth and soared overhead, roaring like thunder, while flowers miraculously rained down. Thus, the lineage became known as the Dragon Sect or the Drukpa, 'Druk' meaning Dragon in Tibetan. The monastery established there, Druk Sewa Jangchub Ling (The Awakening Place of the Ultimate Dragon Lineage), remained for a long time as the principal monastery of the Drukpa lineage, and the place came to be known as 'Namdruk'. Some one thousand huts were built within a year.

Tsangpa Gyare discovered part of the holy pilgrimage site of Tsari, a powerful place sacred to Chakrasamvara. At this unusual site, he personally saw his yidam Chakrasamvara who prophesized that he would be the future Buddha Möepa. According to the secret instructions of the dakinis, he also made accessible many treasures of Dharma in southern Tibet.

Because of his spiritual attainments, Tsangpa Gyare became popular as Druk Thamchay Khyenpa, the Omniscient Dragon, and reverentially called 'Je Drukpa' (Lord Dragon master) or 'The Drukchen' (The Great Dragon). Although widely known as Drukchen Rinpoche, the proper title for this enlightened lama and his successive incarnations is the Gyalwang Drukpa. He was a famous teacher whose teachings were sometimes attended by as many as 50,000 people at once. It was recorded that he had 88,000 eminent followers, of whom 28,000 were enlightened yogis. His order became famous for the purity, simplicity and asceticism of its adherents and the profundity of its spiritual teachings. He wrote a renowned commentary on the Tantra of Chakrasamvara and taught widely.

One early spring morning of 1211, as Tsangpa Gyare was about to conduct an annual initiation, there occurred many unusual omens such as sudden earthquake, rainbows and shooting stars in broad daylight. Fearing that this signified a major obstacle to his life, many people discouraged him to give the initiation. In spite of their dissuasion, he gave the initiation. On the second day of the initiation, after its conclusion, he said, "Even if all the Buddhas of the three times were here, there is nothing to do other than what I have already done." While saying this, he was in a very happy mood in the evening, but on the next day he was feeling sick. They performed many prayers for his quick recovery and health but he said he would die that autumn and gave his final advice:

"The lineage of this tradition will remain strong and flourish. Those who have received the instructions on Mahamudra should feel self sufficient in their practices and can go to expound it to others. Others should mourn the death of their teacher for three years. The best amongst you should go and seal yourselves in meditation cells and help others from there. The seniors should take and guide one or two pupils in frequent solitary hermitages, cemeteries, forests and caves. If those with the sorrow of my death wish to dance, let them dance. If those with the sorrow of my death wish to cry, let them cry. If those with the sorrow of my death wish to pray, let them pray. As compassion and wisdom have been the provisions of my practice in this life, it will be the same in my future lives. You should both also try to practice. Mainly strive in the practice of guru yoga. If you have any legitimate doubts, they will be answered in your dreams. If you maintain this devotion and pray to me later, the blessings will be greater than they are now".

Turning towards his nephew, Onre Darma Sengye, he said, "After my death, you should uphold both of the two seats (Namdruk and Ralung) and practice diligently for three years to mourn your teacher's death. After that build a tomb accordingly and it will become a multi-doored Stupa".

Having said this, he went to Yangon monastery and there he passed away peacefully on the 25th day of the third autumn month (October-November) in the year of the Iron Female Sheep (1211). On the cremation day a rainbow canopy appeared above the monastery and showers of flowers fell. Many could hear celestial music and smell a beautiful aroma in the atmosphere. When his body was cremated, his heart, tongue and eyes remained intact. His skull bore the images of Arya Avalokiteshvara, Manjushri and Vajrapani; the 21 joints of his backbone turned into 21 mini statues of Avalokiteshvara, most of which are believed to have been preserved inside the tomb in Ralung monastery.