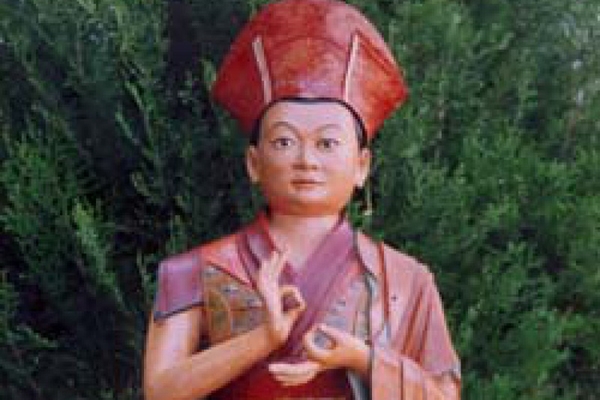 It is stated in the Sutra of Sangay Phepo Chey that even though the enlightened beings have finished accumulating merits (Tib. dzog), have finished benefiting countless beings (Tib. min), have finished creating the pure lands out of their merits and dedications (Tib.jang), and thus accomplished the Buddhahood of the three kayas; they will nevertheless continue to benefit sentient beings, while still in their Dharmakaya form, with their effortless wisdom and compassion.

As the moon is reflected in a thousand different pools, and yet it is true that original form never leaves the night sky; likewise, from the ultimate point of view, enlightened beings that are the wisdom nature of Dharmakaya, also manifest themselves in either the Sambhogakaya form or the Nirmanakaya form, to benefit sentient beings, without ever changing or moving from their original Dharmakaya wisdom nature. They manifest to benefit sentient beings according to their different levels of understanding. Their compassion is so great, it is said, that even if there is only one single sentient being left suffering in the depth of samsara, they would continue to manifest ceaselessly until the sufferings of every sentient being are put to an end.

The coming of the Khamtrul lineage was prophesied by Guru Padmasambhava (Tib. Guru Rinpoche), not once but repeatedly in both the old and newly revealed terma treasures (Tib. Terlung Ngachey). Enlightened masters such as Drupthob Lhawang Drakpa, Lochen Sangay Pelzang and Rigzin Jatshoen Nyingpo (a great master of the Nyingmapa Lineage), as well as many others, have also predicted and praised the coming of the Kyabje Gyalwa Dokhampa lineage.

Vajra Yogini (Tib. Dorji Phagmo) had predicted that Lhatsewa Ngawang Zangpo would have forty principal disciples who would achieve the awakened state of non-duality, nine among whom would achieve the supreme realization known as God-Med, "one who has conceded all the stages of enlightenment and realization".

Of these nine, one was said to have been the First Khamtrul Rinpoche. The First Gyalwa Dokhampa was born to mother Khandro Bum (meaning a hundred thousand dakinis) and father Ri Nyima in Khotsa Rinchengang in Kham Riwochey. From an early age, he liked putting on the white cotton clothing worn before by wandering yogis (Tib. rekar) and often declared that he was a yogi of the Drukpa Lineage saying "Nga Drukpai togden yin". Because he kept doing this, everyone who knew him called him by his pet name "Drukpa".

He was sent to the monastery called Samten Lingpey Densa, where under the guidance of the master Sonam Gyaltsen, he was taught the preliminary studies and received the name Sonam Wangchuk. He understood, with little or no effort at all, all the arts of rigney, whereupon he naturally knew how to read and write the scriptures, play musical instruments, to carve and paint and to perform religious rituals.

During his studies, he heard of the famous Mahamudra teachings and yearned to go to central Tibet to receive these Dongyud Pelden Drukpa teachings. Filled with sad longing he was unable to sleep or eat for many days. One day, he met with a group of people who were heading towards central Tibet. Wishing to go along with them, he asked permission from the monastery and was allowed to leave for Kongpo in central Tibet.

Gyalwa Dokhampa received the vows of Bhikshu (monkhood) and was given the name Ngawang Tenphel by Lhatsewa Ngawang Zangpo. He received various teachings including the Mahamudra and within a few days, he gained great clarity and confidence.
One day while receiving teachings, his guru stared intently in Rinpoche's direction and said, "There is not much need for different kinds of practice. The main thing is to be aware of the nature of one's own mind." Gyalwa Dokhampa instantly understood his guru's meaning and practiced as such; and within eighteen days, he realized the nature of his own mind.

He conveyed to his guru of his realizations of the true nature of mind. His guru handed him a letter and inquired, "What I have written here, is it the same as what you have realized?" He opened and read the letter and found that his experience of realization and what his Guru had written were inseparable in its meaning.

From that moment on, he wore the simple white cotton clothing of the wandering yogis, carrying no other worldly possessions apart from a bone trumpet (Tib. kangdung) and a skull cup (Tib. kabli). He lived and meditated very simply in the mountains of Chowori, Choeshul Chogmo Rithoe, Gang Teysay (Mount Kailash), Lachi and Tsarita. He received numerous teachings from various famous masters such as Lhawang Drakpa and Jetsun Taranata.

He displayed many miraculous signs of an enlightened mind. Such an instance of this miraculous display was when he was once wandering in the nomadic area of Dog Taru, many ferocious dogs began barking at him and some even tried to bite him. He jumped on a crudely made stone wall nearby, and danced along it, leaving a visible trail of footprints on the solid stone, as he journeyed back.

After visiting Tsari, the holy place of Chakrasamvara discovered by the First Gyalwang Drukpa, he went to visit his guru who was then residing in Namgyal Lhumphur. There he offered his guru the Zhidung Karmo Menday (white precious stone offering) and proceeded to clarify all his remaining doubts and was given all the remaining teachings and a public enthronement ceremony. This time, his Guru Lhatsewa Ngawang Zangpo then prophesied, "If you go to Kham, your activities will spread from Kham to as far as China." And Gyalwa Dokhampa was then sent to the Kham region. However the people of Kham Riwochey were jealous of him, they used abusive words, beated and hurt him until he almost nearly died. But as he had transcended all dualistic thoughts, he remained in the state of equanimity, where praise and blame, happiness and sadness were the same; and instead, out of compassion, he prayed that those people who had hurt him would be able to benefit from him in the future through this negative connection.

A few days before Gyalwa Dokhampa was to leave Kham for China, he had a vision where he saw the mountains of China, he took this as an indication that he had to remain in Kham. It is said that the people of Kham greatly benefited from this decision, as Gyalwa Dokhamp's eminent presence inspired many of the kings (of the Kham region) to take him as their spiritual teacher, and thus enabled him to peacefully mediate between them, saving many lives and preventing frequent civil wars.

He revealed a holy cave that he named Daki Sangwaphu in Bha valley and meditated there, without the interruption from eating, sleeping or relieving himself, for nine months in the Vajra Posture (Tib. Dorji Kiltrung).

Gyalwa Dokhampa was received by his disciples in Kham, whereupon he gave them the common and uncommon teachings continuously, without rest, both during the day as well as at night. When the teachings were completed, there was not even one disciple left who did not gain at least one good spiritual realization and insight; after which Rinpoche then carried out a three-year retreat.

When the moment of his passing neared, Khamtrul Rinpoche saw all the signs for his time to leave this world. He met the illustrious master, the Fifth Gyalwang Drukpa Pagsam Wangpo, one of the reincarnations of Kunkhyen Pema Karpo, who asked him to remain longer in this world for the benefit of sentient beings. Khamtrul Rinpoche conceded with the wishes of Gyalwang Drukpa Pagsam Wangpo and of his guru and performed long life practice (Tib. tshedup) in Gyang Yak Kurgyel Shenyer. Avalokiteshvara, Tara (Tib. Jetsun Drolma), Guru Padmasambhava, Tandin and many other wrathful and peaceful deities appeared to him during his practice.

During Khamtrul Rinpoche's lifetime, his teachings flourished so greatly that it is said, that almost all the caves, mountains and valleys of Kham were filled with his disciples and teachings. At the age of 69, he passed into nirvana in the retreat center called Mishig Dorji Dzong gyi Drubney (the Indestructible Vajra Fortress Retreat) with many auspicious and miraculous signs of rainbows and a rain of flowers.

The First Khamtrul Rinpoche established many retreat centers, educational institutes, monasteries and nunneries in Kham. There were almost 200 branches of Khampagar Monastery in the Kham region alone.

The above biography of the First Gyalwa Dokhampa Ngawang Tenphel was compiled by H.E. Dongpa Rinpoche. Dongpa Rinpoche had the great privilege, from a very young age, to be personally brought up by the Eighth Khamtrul Rinpoche Dongyud Nyima. He accompanied Rinpoche wherever he went and was witness to his extraordinary life. He has been able to enlighten us with this authentic foundation of the origins and life story of the Great Drukpa master.