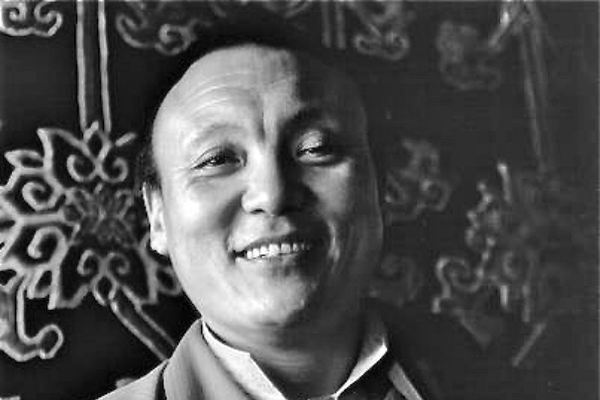 Many wonderful signs manifested during the ceremonies leading up to his enthronement. At his Upasaka robe offering ceremony, it began to rain and a rainbow appeared. Several days later, the child went out to play with 20 wild sheep that had surrounded his tent and though he pulled their ears and horns, they remained calm and unafraid of him. When he was enthroned, large snowflakes appeared in the forms of various flowers.

The VIII Gyalwa Dokhampa received an excellent monastic education under the guidance of various great masters. The root guru of the VII Gyalwa Dokhampa was the VIII Choegon Rinpoche Choekyi Gyamtso who gave him the complete Drukpa Lineage teachings and initiations. He also learned Tibetan poetry, composition, astrology, history, logic, dialectics and philosophy from Khenpo Dondam. He passed all the exams for qualification as a Vajra Acharya of the twelve mandala practices of Khampagar Monastery. Rinpoche was also a very accomplished artist. He was adept in painting, metal work, architecture, wood carving and tailoring.

Gyalwa Dokhampa travelled extensively throughout Tibet giving teachings and performing Sadhanas, as well as spending long periods in retreat. He was tireless in his Bodhisattva vows to save all sentient beings. In Khampagar Monastery, Rinpoche transmitted the whole series of Drukpa Lineage teachings to Dorzong Rinpoche, Sephu Gyalwang and many other heads of Drukpa Lineage monasteries.

During the culture revolution in Tibet, Khamtrul Rinpoche left for India and Tashi Jong (meaning "Auspicious Valley") located in historically holy part of northern India, known as Ngalen Gyi Yul. When Khamtrul Rinpoche visited Tashi Jong he had a vision of peaceful and wrathful Manjushri and saw that Tashi Jong and its surrounding areas were formed by body, speech, mind quality, and activity mandala of Manjushri and therefore he decided this to be the place to re-establish his seat, Khampagar monastery.

Khampagar monastery is renowned for Togdens and yogis. A Togdens is someone who has realized the nature of his own mind through practicing the six yoga’s of Naropa and Mahamudra meditation.

Later in the life, Gyalwa Dokhampa was invited to Bhutan by the Royal Family of Bhutan, and he visited many of the holy places there and gave many initiations and teachings in different parts of Bhutan. On Rinpoche’s last visit to Bhutan, he gave initiation of Dorje Trengwa, at the request of devotees. He had been in Bhutan for two years when he passed away on the 5th of January, 1980 at the age of 49 at Trongsa Dzong, Bhutan.

As Bodhisattvas have multiple emanations, the Eighth Gyalwa Dokhampa returned in two forms at around the same time to benefit all sentient beings. We are very fortunate to have them in our realm.