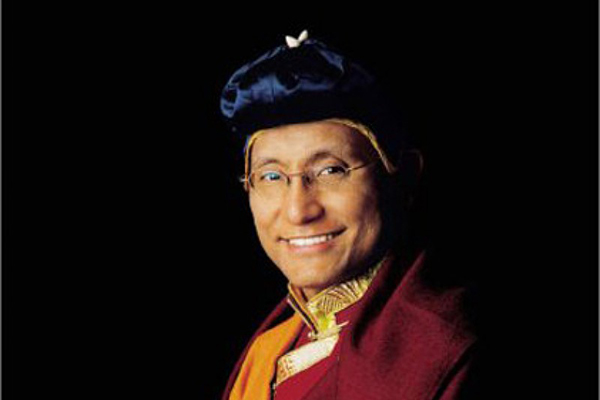 The present Gyalwang Drukpa is the twelfth incarnation of the founder of the Drukpa Lineage, Tsangpa Gyare Yeshe Dorje (1161-1211). The successive reincarnation of the Drogon Tsangpa Gyare are recognized as the Spiritual head of the Drukpa Lineage and responsible for the spiritual guidance of over 800 Drukpa Monasteries, in Tibet, Nepal, Ladakh, Garsha Kinnuar and other parts of Indian Himalayas. The Twelfth Gyalwang Drukpa's father is the Nyingmapa master Zhichen Bairo Rinpoche, the incarnation of Buddha Vairochana and thirty-sixth incarnation of the pandit Vairochana. Pandit Vairochana was an illustrious disciple of Guru Padmasambhava, and a renowned translator. Bairo Rinpoche is the former abbot of Kathok Zhichen Monastery in Kham, eastern Tibet. The Twelfth Gyalwang Drukpa's mother, Mayum-la, is the daughter of a yogi, and a disciple of Dzogchen Rinpoche, His Holiness Dudjom Rinpoche and many other great lamas.
The Gyalwang Drukpa was born in northern India, at Lake Rewalsar or 'Tso Pema' (the 'Lotus Lake') - a place sacred to Guru Padmasambhava. The birth took place during lama dances celebrating the auspicious 10th day of the first month. This day in the Tibetan calendar is sacred to Guru Padmasambhava.

Several propitious omens occurred before and during the birth of the Gyalwang Drukpa. During his mother's pregnancy, Gyalwang Drukpa's parents often heard the chanting of the Amitabha mantra coming from inside the womb. Also, thunderstorms, snow, a rainbow, and other signs were conspicuously present at his birth to celebrate the arrival of a great being. Apparently, the late Pawo Rinpoche, who was in Varanasi at the time, was aware of the birth of this unusual child and performed a Sang Chod to indicate his respect. On the same day, the supreme Nyingmapa leader, His Holiness Dudjom Rinpoche, offered a khata to the newborn child.

Even before learning to read and write, the young Gyalwang Drukpa was already familiar with the sacred texts. Whenever the pages of these texts were not arranged in their proper order, he would immediately recognize and point out the error. Moreover, the delicate and unusual child repeatedly proclaimed to his parents that he was a high lama who had a monastery and a lama's residence. One day the three-year-old boy told his father, "A man with a white beard is coming to take me back to my monastery". Soon after, the search team made up of his predecessor's disciples came to their home in Dalhousie. The 'man with a white beard' (the First Thuksey Rinpoche) had finally arrived, looking for the young child who could be the reincarnation of his late guru, the Eleventh Gyalwang Drukpa.

The little child recognized some of the former servants and disciples of the Eleventh Gyalwang Drukpa, and to their astonishment called them by their true names. He also correctly identified some of his predecessor's belongings from a collection of various artifacts. The First Thuksey Rinpoche immediately knew that this child was indeed the genuine reincarnation of his deceased guru. Immediately after his discovery, the young tulku was first enthroned at the late Khamtrul Rinpoche's monastery in Dalhousie. A year later, the four-year-old Gyalwang Drukpa was enthroned at his own Dotsok Monastery in Darjeeling, West Bengal.

Without difficulty or hindrance, the young Gyalwang Drukpa understood both the theoretical and practical aspects of the profound View, Meditation and Action. At the age of nine, he began to meditate under the personal guidance of the First Thuksey Rinpoche. Even at that young age, he experienced in meditation a deep compassion and unconditional love, through an intuitive understanding of the Ultimate View of Emptiness. Sometimes, the little Gyalwang Drukpa wept and spontaneously spoke about genuine impartial love and compassion, to the amazement of those around him.

From an early age, the Twelfth Gyalwang Drukpa manifested the extraordinary characteristics of a sublime spiritual being. Even before his discovery and official recognition, he was spontaneously kind and thoughtful to insects, animals, and all neglected, downtrodden creatures. He later became a vegetarian, after discovering that the piece of beef he was eating actually came from a cow which had earlier walked passed him.

When only six years old, the Gyalwang Drukpa earnestly began his training as the incarnate spiritual head of the Drukpa Order. He was brought up and educated by his principal guru, the First Thuksey Rinpoche (who was the Drukpa regent). He also received precious teachings from the late Venerable Khenpo Noryang; the late Khenpo Ngawang (main abbot of the Drukpa school and incarnation of Shawaripa, one of the eighty-four Mahasiddhas of India); the late Khenpo Ngawang Choedrak (his official tutor) and Bairo Rinpoche (his father). The Gyalwang Drukpa also personally received the complete transmission of the Nyingmapa tradition from the great Dzogchen master, the late His Holiness Dudjom Rinpoche.

In addition, the Gyalwang Drukpa studied and practiced under several other exalted spiritual masters including the late Lobpon Kangri Kunsang Dorje Rimpoche, uone of the foremost yogis of this century, who spent most of his life in the wilderness contemplating Mahamudra and who was venerated by lamas of all the Tibetan schools; the Nyingmapa abbot and Dzogchen lineage holder, Kyabje Trulshik Rimpoche, Zhichen Ontrul Rinpoche, the compassionate master of the Nyingma Kathok lineage and Pawo Rinpoche, the late great Sarma lineage holder who was a master of both Mahamudra and Maha Ati. In recent years, His Holiness Gyalwang Drukpa also received profound teachings and instructions from H.E. Do Drupchen Rinpoche, revered Dzogchen master residing in Sikkim.

Without difficulty or hindrance, the young Gyalwang Drukpa understood both the theoretical and practical aspects of the profound View, Meditation and Action. At the age of nine, he began to meditate under the personal guidance of the first Thuksey Rimpoche. Even at that young age, he experienced in meditation a deep compassion and unconditional love, through an intuitive understanding of the Ultimate View of Emptiness. Sometimes, the little Gyalwang Drukpa wept and spontaneously spoke about genuine impartial love and compassion, to the amazement of those around him.

His Holiness Gyalwang Drukpa carries out his functions and responsibilities with great zest and patience as the spiritual head of all Drukpa monastries and dharma centres around the world. His dharma activities have spread to France, England, Germany, Switzerland, Spain, Mexico, Taiwan, America, Australia, Malaysia and Hongkong.